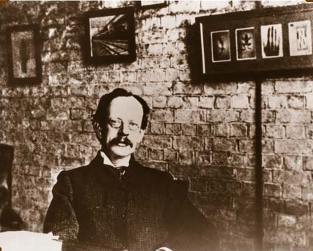 Sir Joseph John Thomson was born in Cheetham Hill, a suburb of Manchester on December 18, 1856. He enrolled at Owens College, Manchester, in 1870, and in 1876 entered Trinity College, Cambridge as a minor scholar.

He became a Fellow of Trinity College in 1880, when he was Second Wrangler and Second Smith's Prizeman, and he remained a member of the College for the rest of his life, becoming Lecturer in 1883 and Master in 1918.

He was Cavendish Professor of Experimental Physics at Cambridge, where he succeeded Lord Rayleigh, from 1884 to 1918 and Honorary Professor of Physics, Cambridge and Royal Institution, London. Thomson's early interest in atomic structure was reflected in his Treatise on the Motion of Vortex Rings which won him the Adams Prize in 1884. His Application of Dynamics to Physics and Chemistry appeared in 1886, and in 1892 he had his Notes on Recent Researches in Electricity and Magnetism published.

Thomson co-operated with Professor J. H. Poynting in a four-volume textbook of physics, Properties of Matter and in 1895 he produced Elements of the Mathematical Theory of Electricity and Magnetism, the 5th edition of which appeared in 1921. In 1896, Thomson visited America to give a course of four lectures, which summarised his current researches, at Princeton. These lectures were subsequently published as Discharge of Electricity through Gases (1897).

On his return from America, he achieved the most brilliant work of his life - an original study of cathode rays culminating in the discovery of the electron, which was announced during the course of his evening lecture to the Royal Institution on Friday, April 30, 1897. His book, Conduction of Electricity through Gases, published in 1903 was described by Lord Rayleigh as a review of "Thomson's great days at the Cavendish Laboratory". A later edition, written in collaboration with his son, George, appeared in two volumes (1928 and 1933).

On that April 30, 1897, Thomson announced that cathode rays were negatively charged particles which he called 'corpuscles.' He also announced that they had a mass about 1000 times smaller than a hydrogen atom, and he claimed that these corpuscles were the things from which atoms were built up. Later in 1897, he wrote: "...we have in the cathode rays matter in a new state, a state in which the subdivision of matter is carried very much farther than in the ordinary gaseous state: a state in which all matter-that is, matter derived from different sources such as hydrogen, oxygen, etc.-is of one and the same kind; this matter being the substance from which the chemical elements are built up."

He had leaped to the conclusion that the particles in the cathode ray (which we now call electrons) were a fundamental part of all matter. This was reaching quite far beyond what he had actually discovered. As he was to recall much later:

"At first there were very few who believed in the existence of these bodies smaller than atoms. I was even told long afterwards by a distinguished physicist who had been present at my [1897] lecture at the Royal Institution that he thought I had been `pulling their legs.' "

Thomson's corpuscle hypothesis was not generally accepted, even by British scientists, until he spoke of it again in 1899. By this time, George Francis FitzGerald, an Irish physicist, had suggested that Thomson's 'corpuscles' making up the cathode ray were actually free electrons. In fact, this suggestion was published as a commentary to the publication of Thomson's April 30, 1897 lecture in which he first announced his results. Thomson himself continued to use the term corpuscle until 1913. Other people had measured the e/m ratio or suggested that the cathode rays were composed of particles, but Thomson was the first to say that the cathode ray was a building block of the atom. It was a risky thing, but he was proved right and for his courage he is remembered as the discoverer of the electron. (reference: http://dbhs.wvusd.k12.ca.us/AtomicStructure/Disc-of-Electron-Intro.html)

Thomson returned to America in 1904 to deliver six lectures on electricity and matter at Yale University. They contained some important suggestions as to the structure of the atom. He discovered a method for separating different kinds of atoms and molecules by the use of positive rays, an idea developed by Aston, Dempster and others towards the discovery of many isotopes. In addition to those just mentioned, he wrote the books, The Structure of Light (1907), The Corpuscular Theory of Matter (1907), Rays of Positive Electricity (1913), The Electron in Chemistry (1923) and his autobiography, Recollections and Reflections (1936), among many other publications. (reference)